Tue, Feb 13, 2018 - Wed, Feb 14, 2018 the Ukrainian Startup Pavilion will be held in Silicon Valley. 10 Ukrainian startups will be selected for this dedicated pavilion at StartupGrind, one of the most anticipated iconic startup conference event of the year. More details on Facebook.

Startup Grind is the largest independent startup community, actively educating, inspiring, and connecting 400,000 founders in over 200 cities. We nurture startup ecosystems in 85 countries through events, media, and partnerships with organizations like Google for Entrepreneurs. The cornerstone of our global community are monthly events featuring successful local founders, innovators, educators and investors who share lessons learned on the road to building great companies. Founded in Silicon Valley, Startup Grind has now hosted 2,000 fireside chats since its founding in 2010. To date, Startup Grind has helped millions of entrepreneurs find mentorship, connect to partners and hires, pursue funding, and reach new users.

We expect hundreds of accredited reporters, bloggers and correspondents from around the world, including Bloomberg, CNBC, Financial Times, Mashable.

This year, for the third time, Zhenya Rozinskiy and Nick Bilogorskiy selected 10 Ukrainian startups for a dedicated pavilion at StartupGrind

Press release : Zhenya Rozinskiy and Nick Bilogorskiy hosted the Ukrainian Startup Pavilion for the very first time at the recent StartupGrind Conference. The all-new feature included 8 companies with Ukrainian ties: DataVirtuality, CartFresh, QRhythm, SpinBackup, Staffr, Corezoid, Turnkey-lender, and Buzzarm.
StartupGrind Conference had more than 3,000 attendees, and the Ukrainian Startup Pavilion received non-stop traffic over the course of the event. Each featured company received positive feedback, and one of the companies even received an acquisition inquiry.
Sergei Danilenko, Marketing Director at Corezoid, a development platform allowing enterprises to build customized digital cores in days, said, “We were extremely happy to be a part of StartupGrind movement and Ukrainian Pavilion, we had the most crazy experience talking non-stop as people kept coming to visit our Corezoid booth.”
CartFresh CEO Yegor Anchishkin said, “Ukrainian Startup Pavilion at StartupGrind was a great event, which really gave us exposure to a mufti-faceted mix of ideas and opinions. Being able to compare your way of thinking to those of the insanely cool speakers during those two days was extremely valuable.”
The night before StartupGrind Conference, founders of all the companies attended a private event in Union City, California, where they met with venture capitalists, incubators, and angel investors, practiced their pitches, and connected with Silicon Valley-based Ukrainian entrepreneurs and engineers.
Nick Golovin, CEO at Data Virtuality, said, “StartupGrind was a fantastic opportunity for us to exchange with peers, potential customers, partners and investors.”
Zhenya Rozinskiy and Nick Bilogorskiy plan to expand next year’s Ukrainian Startup Pavilion to include at least 10 companies and to partner with new events.
“Ukraine proved that they are at least at par with local startups. This is a life university for these companies. Spending time with other founders helps them learn and grow,” said Rozinskiy.
“As the cost of capital is decreasing it becomes easier to fundraise. I am grateful to StartupGrind for allowing us to bring the best Ukrainian startups to Silicon Valley, where the money is,” said Bilogorskiy.
For all companies involved, the opportunities to present their ideas, products, and services at StartupGrind was a chance to represent Ukraine-based ingenuity while seeking the next stage of their business growth. Rozinskiy and Bilogorskiy were pleased to be at the helm of the first Ukrainian Startup Pavilion and look forward to continuing the opportunity for a new group of companies next year. 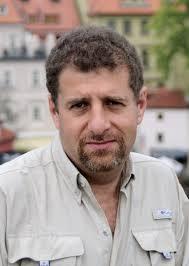 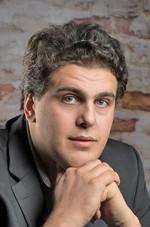 Send email to apply@ukrainianstartuppavilion.com. Include your pitch deck and why you want to participate.